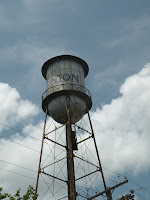 Back in July my husband and I drove north to the small town of Clinton, Louisiana for their Red, White, and Blueberry Festival. Driving up there took us along Highway 67, and brought back old memories. For a while in the 1980's, when I was a single mother, I supplemented my paycheck with a second job doing home health visits, and usually wound up in the far flung parts of the parish, or the ones nearby. I was convinced that if the directions to get to a patient included the words "gravel road", "cattle gap" or "trailer park", they automatically gave it to me.


My ride up Highway 67 involved none of the above; it just took me to a sheltered workshop in the town of Zachary. For the first few months that I made the trip, there was a snow cone stand by the side of the road called the Praise Jesus Snow Cone Stand Amen.


Actually, the place wasn't called the Praise Jesus Snow Cone Stand Amen. The sign out front said "Snow Cone Stand" and above those words the owner had written "Praise Jesus" and below them, "Amen", so the sign read, from top to bottom:

Praise Jesus!
Snow Cone Stand
Amen
But of course the words all blended together in my mind into the name of the snow cone stand.
I lead a surrealistic life. On the day I first passed The Praise Jesus Snow Cone Stand Amen, my first day at the workshop, I was greeted in the hall by a naked man, one of the clients who had become disturbed about something and was running away from the staff member who was trying to get him dressed. That was not a common occurrence at the workshop, fortunately, which made it all the more memorable. If I'd known that was about to happen I might have thought to fortify myself with a snow cone on the way, but given the sign out front I doubt they made any with whiskey in them.
The snow cone stand closed, alas, and my drive became more  ordinary. It often occurred to me that The Praise Jesus Snow Cone Stand Amen would make a wonderful title for a book of just-this-side-of-precious short stories about a small town in the south. Come to think of it, it would make an even better title for a book of just-the-other-side-of-precious short stories about a small town in the south. Unfortunately, the snow cone stand is gone, along with other landmarks of my home health days: the general store in Hardwood that also served as a post office, the Star Hill Post Office and the antique shop that now sells chainsaw sculptures and garden pots from Mexico.
On the way back, we did pass the Miller and Daughter Mortuary. It's nice to know that some of the old  landmarks remain. I wish I'd taken a picture.
Posted by Coleslaw at 3:58 PM