The Saga of My Quilt

Once upon a time I needed an inspiration for my tired looking bedroom. I found a picture from an ad for an expensive interior designer. It was the only ad of theirs I ever liked, but since I have a four poster bed like the one in the designer room, it was a start.


(The bed has a story. I bought it at an estate sale silent auction. The woman who owned it was in jail for shooting her husband, and the bank was selling the furniture to help settle the estate. Other people acquire furniture in furniture stores. Someday I might try that.) 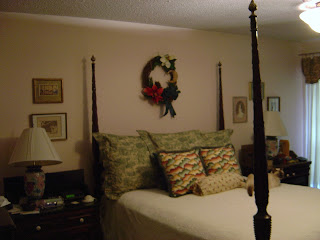 Rather than using high-priced designer fabrics, I used quilt fabrics in pinks and greens, with a purchased matelasse bedspread like the one in the designer room. I made a lovely pink bedskirt which you can see below. My husband said he learned a whole bunch of new words while I was sewing. 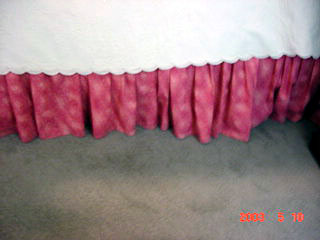 Then my SIL bought us this beautiful quilt in the Amish country, thinking it would go with our bedding. Alas, the greens and pinks were too blue, but that was okay, because I wanted a winter look. As you can see, it needed accessories. 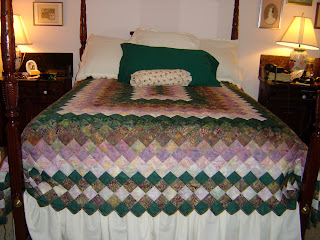 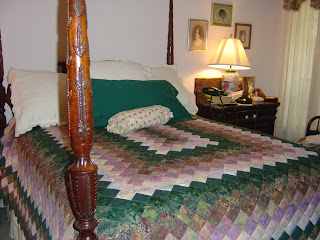 It needed new window treatments, too. The New Orleans bordello look valances don't quite go with the Amish look.


With the help of the brilliant and fabulous Cookie Martin of Batiks Plus, I found the perfect match for 6 of 9 of the quilt fabrics, and 3 more that harmonize. I made pillows to go with the quilt. 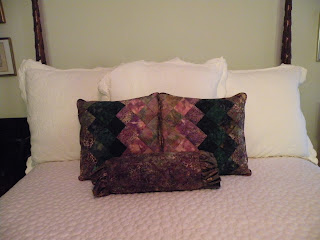 Where is the quilt, you ask? Well, in the meantime I acquired Truffle, the demon spawn, and Poppy lost her leg. So when Truffle isn't bouncing across the bed, Poppy is hanging on to the bedspread to keep her balance as she climbs on. I put the old bedding back on the bed until I got a new duvet and decided the new pillows might spruce it up. 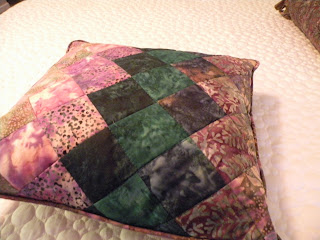 See the beautiful en pointe patches? It was fun figuring out how to do this (easier than it looks) and how big to make the squares to cut the pillows out on the diagonal. Geometry, it's not just for high school anymore. 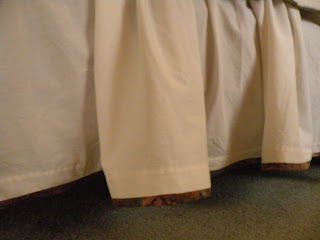 The purchased bedskirt now has trim that matches the quilt. The quilt that is sitting in the armoire. 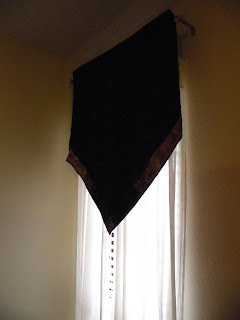 Alas, the valances came out too long. I have 3 possible solutions to the problem. My favorite is moving to a new house with the same size windows but 9 foot ceilings. 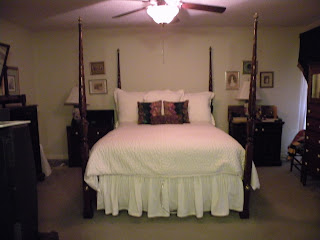 Those poor pillows look lost in a sea of cream. I'd hang the quilt on the wall behind the bed, but Truffle could still use it as a scratching post. Maybe I could shield it with Plexiglass like in a museum?


I guess given a choice between beautiful inanimate objects, like the quilt, and obstreperous living things, like Truffle, Satan's minion, I choose the obstreperous but amusing ones.

Update, November 2014: I have found a solution for the quilt problem. Last winter, inspired by the use of multiple coverlets in Country Curtains catalogs, I began using the quilt as a blanket, with the duvet on top. The pointed border of the quilt showed all around, but the top was protected from kitty claws. This past summer, my husband bought a new coverlet for the guest bed that proved to be a little too big. I noticed it has an embroidered pattern in the same colors as the quilt, plus a bound edge in the same color family as the binding on the quilt and bedskirt, so now it sits on top of the quilt. Less of the quilt's pointed edge shows, unfortunately, but otherwise I love the look.