This morning, I called a florist in Connecticut from here in Louisiana to send flowers to my niece in New York.

My poor niece broke a bone in her heel and had to have surgery to put in a plate and pins. To add to the fun, when she first went in for surgery, it turned out the implant had been contaminated and couldn't be used, so she had to wait another week for the surgery.

My five and a half faithful readers will remember how whiny I was about a less involved broken foot of my own last summer, even though I got to spend some of my recovery time touring the British Isles and the Appalachians, so I understand what she is going through. Hence the flowers. Usually when I send people flowers, I use 1-800-Flowers, and they do a decent job, but I wanted something really special.

That’s where Glimpse of Gaia comes in. At the time of the decision in  Ahlquist vs. Cranston, I became aware of Glimpse of Gaia as the florist willing to deliver a bouquet to Jessica Ahlquist when local florists wouldn’t. They do beautiful work. Since I “liked” their page on Facebook, I followed the conversation in which they revealed that they belong to a network of florists around the country who make similar artistic arrangements. That’s how I wound up calling a florist in Connecticut from here in Louisiana to send flowers to my niece in New York. (The third bouquet under “Deliveries” is what I was aiming for.) It wasn’t cheap, but as I said, I understand how she feels right now.

I even got a call back to tell me that the florist in New York asked if they could delay delivery until tomorrow, when they are getting a fresh shipment of flowers that they can use. Sounds good to me.

It’s hard sometimes for me to look back and remember how life was before the internet. When I was growing up, FTD (Florists Telegraph Delivery, later Florist Transworld Delivery) was considered high tech. (Of course, we didn’t have the phrase “high tech”). To know what your flowers were going to look like, you’d need to look at a catalog at a participating florist’s shop or look at the ads in TV Guide or Parade that preceded major holidays.

My niece, on the other hand, has had the internet available to her all her adult life, especially as her dad, my older brother, is a techno-geek who always has the first gadget the minute it rolls off the assembly line. This is not the same older brother who worked on the LEM; he, oddly enough, is pretty much a Luddite who has never set up the voicemail on his cell phone. My son got his first modem, a 2400 baud model that nevertheless was his connection to a local computer user group, from his uncle. Neal spent that summer playing a Trivial Pursuit game online, which meant that he spent a lot of time running down the hall to ask me, “How do you spell ______?” I told friends that if I had ordered my son to spend all summer practicing his spelling, he would have reported me to Child Protective Services.

My niece’s daughter, my great niece, has never known a time without high speed internet access. As far as she is concerned, pre-internet days and the time of the dinosaurs are roughly coeval. My great niece got an iPad last Christmas and uses it to take pictures of her and her friends, edit them with various filters, and post them on Facebook. I think she also uses her iPad to practice her spelling, at least I hope so. She needs to as badly as her cousin did.

I hope the flowers cheer my niece up. I suspect she needs it. I hope my great niece takes a picture and posts it, unedited, so I can see how they turned out.

Update, 4/7: My niece is thrilled with the bouquet. My brother took a picture of it, and while it is nothing like what I expected, it is lush and unusual. I'm amazed at how well the tulips and roses match. 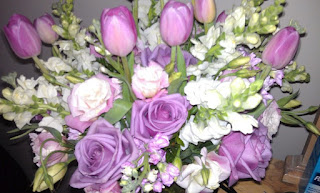