Evangeline Downs Racetrack in Opelousas opened this week and John and I decided to go. There’s a nice hotel connected to the racetrack, which bills itself as a “Racino” because it has a casino (just slot machines and video poker) attached.

Races don’t start until after 5 PM and John and I don’t like casinos, so we looked for other things to do during the day. We started at the Opelousas Tourist Center on the grounds of Le Vieux Village (The Little Village), a collection of rural buildings from the late 1800’s and early 1900’s. One of the buildings is the old railroad station, and inside of part of the station is the Louisiana Orphan Train Museum.

I have to admit, when I first saw the words “Orphan Train Museum” on the outside of the train station, I thought it meant orphaned bits and pieces of old trains, until I saw the signs pictured below: 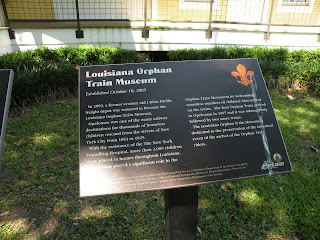 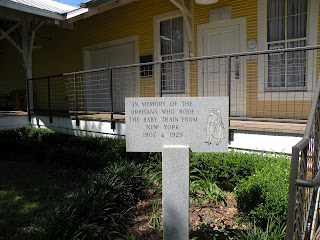 When we went into the museum, the manager*, who offered to give us a tour, asked if we knew anything about the orphan trains of the early 1900’s. “No,” I said, at the same time John said “Yes.” The manager started us off at the beginning.

The orphan trains arose out of a desire to take homeless children off the streets of large cities, primarily New York, and find them a place to live. Two agencies, The Children’s Aid Society and the Foundling Hospital of New York, (both in existence to this day) sent the orphans (who usually actually had living parents who could not care for them) to homes around the country. The Children’s Aid Society, according to a large poster giving their story, only sent 79 children to Louisiana, but the Foundling Hospital, a Catholic institution started by a nun, sent more than 2,000.

Since we were in the heart of Catholic Louisiana, I was expecting a sunshine and roses story of lives made brighter by the devoted work of the nuns and the dedicated priest, Father Engberink.

Not quite. One of the first things we heard about the Foundling Hospital was “Those nuns took good care of the children, but they were mean.” Even when mothers told the nuns they were leaving the children at the hospital for a short time and would come back to reclaim them, the children were sent off and when their mothers came back, they had no way to find them. According to our guide, the hospital was repeatedly asked to release its records and told stories of them being destroyed or lost. When they were finally presented with a subpeona several years ago, the records miraculously appeared. We were also shown a document surrendering a child to be placed on the orphan train. Our guide called our attention to the signature, obviously that of a well educated person. He pointed out that many of the mothers who left children at the Foundling Hospital were poor immigrants, and doubted that it was truly the mother’s signature. I am not sure that’s a fair conclusion. It’s possible to be well educated in your own country but still not be able to work successfully in a new one.

Most of the orphans, we were told, were not formally adopted. They were treated in many ways like indentured servants. The rules of the Children’s Aid Society specified that boys were expected to work on the family farm or business and to stay until they were 18. The families were also expected to treat these boys as they would their own children when it came to living conditions and education, and a child could be removed from a home if he weren’t treated well, but the CAS according to our host, did not make regular home visits. The Foundling Hospital sent a visitor once a year.

About five minutes into our tour another group arrived: two women who decided to visit because a friend of theirs learned only after her grandmother’s death that grandma had been an orphan train rider. She never told anyone in the family. Yes, our guide said, that was very common. In 1907, being an orphan was a shameful thing, and besides, the riders were derided by their schoolmates as “Yankee children”, which meant a lot that soon after the Civil War.

Then he told the story of his own father. His father was sent south on the orphan train when he was three, along with his sister Agnes, who was six. There was another George on the train, and the two got mixed up. Agnes tried to tell her new family that the George they had was not her brother George, but she spoke only English and the family spoke only French. Not until a year later, when the annual visitor arrived, did both families learn of the mistake. By that time, both boys had bonded with the families they were in. However, rather than allowing Agnes and her brother regular visits, Agnes’s foster mother did her best to keep her from the boy.

Only when our host was grown did he learn of his father’s past. Comparing notes with a friend who was somehow related to Agnes, they realized the two were brother and sister and insisted on getting them together. The story of their reunion is not an sentimental one. It went something like, “Well, George,” said Agnes. “Well, Agnes,” said George.

There were many stories of the orphan riders, some of whose pictures were on a wall. There was a woman who was adopted by a very wealthy family and treated as their own. There was another woman who was abused by her foster family and who as an adult refused to use their name. She married and she and her husband, despite being poor, sent all of their children to college. On his deathbed, her foster father told her how proud he was of her and complained that his other children were squandering his money. We weren’t told her response.

The most famous of the orphan train riders was a football coach at one of the smaller universities in Louisiana who had a stadium named after him. Nobody knew until he was older that he was an orphan train rider.

Several of the orphan train riders became nuns. One of them is still alive and wants to transfer from her convent in New Orleans to the sister house near the museum, but hasn’t been given permission.

We saw a number of donated artifacts, mostly clothing the children wore (handmade by the nuns at the Foundling Hospital) and the numbered tags that were pinned to their clothes so their new families would know them.

Afterwards my husband asked me whether I thought the orphan trains were a good thing or not. I think the people who dreamed up the idea thought they were doing well, getting children out of danger and into homes where they would at least be fed and housed and probably educated. They were expected to work, but all children who lived in poor rural areas were expected to work. It’s easy to say that more of an effort should have been made to keep families together and to enable mothers to keep their children, but that takes more resources than poor, private agencies have.

The problem is, I think that the good intentions these agencies had toward these children were shaped by ideas about socioeconomic class, nativism versus immigrants, shame attached to unwed motherhood, and the view that the agencies and not the children’s parents knew what was best for the children. Furthermore, I’m not sure these ideas have ever gone away. I think they affect our views of how to save children from poverty to this day.

*I’m not sure what his title is, actually. He and his wife staffed the museum, which is very small, just one large room, that day, and I got the impression that he was instrumental in starting it, but the museum is run by a board of directors, so I don’t think he was the owner, either.
Posted by Coleslaw at 10:44 AM