Now that I have potting soil, I decided to buy more plants to put in the pots. While we were at the Home Depot, I saw some lovely mixed containers of petunias, verbena, and coleus. Since I have over half a dozen empty containers sitting around my garden, the last thing I needed was another container, but I wanted to buy a similar mix of plants to place in a big concrete tub in the back. I also wanted to find some more herbs and some Jacobina to replace the ones in the back bed that my husband had removed, thinking they were weeds.

My husband, bless him, has removed at least a ton of plants over the years that needed to be removed. Unfortunately, he has also weeded out my chives, garlic chives, almost all of the plumbago from the side bed, most of the oregano, although it grows back rapidly so it wasn’t a big loss, and the aforementioned Jacobina. Jacobina die back to the ground in winter and in the spring they look like sticks. The sticks were in the exact same spot as the flowering plants of the preceding summer, which should have served as a clue, but let’s let bygones be bygones.

Yesterday I spent plant shopping, and today I planted several containers. Plants in containers never get mistaken for weeds. Pictures are below. I also bought four Jacobinas. They are going to require digging with a shovel to plant, so I assigned that task to John. It seemed only fair. 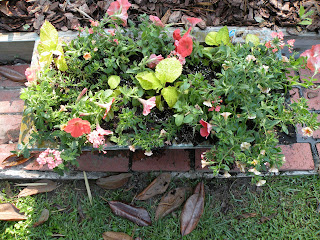 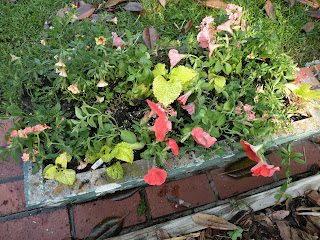 I should know better than to put more than one kind of plant in one pot. It always starts out looking pretty, but in the end, there will be only one. This year, my money is on the petunias.

That spot in front of the bear claws is where the Jacobinas grew. 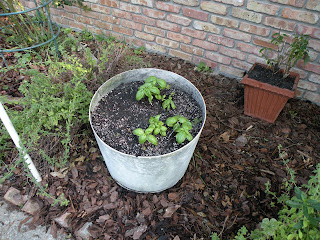 The basil plants look small now, but in a week or two, they will be several feet high. 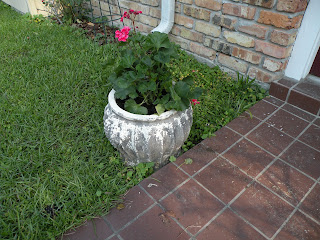 I never have any luck with geraniums. Say goodbye to this one. 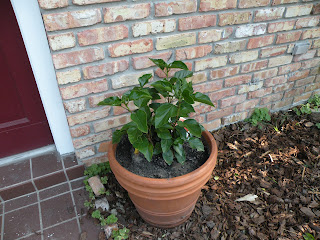 Hibiscus. It has several buds ready to bloom. Hibiscus plants are related to okra. 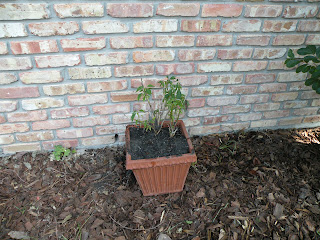 Every Christmas I buy a live poinsettia for the front porch, and then leave it in its pot in the garden until it dies.This one keeps clinging to life (barely), so I repotted it and moved it to a sunnier location. My mother in law had a neighbor who grew a poinsettia in her yard. It grew up a wall and stayed red all winter. Even though New Orleans is not far from Baton Rouge, it has a slightly different climate for growing things (not to mention much richer soil). 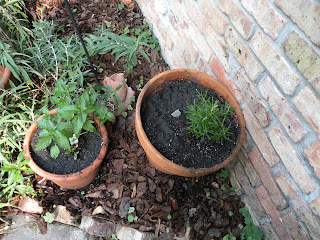 That's spearmint on the right, and rosemary on the left. I'm hoping the spearmint will live long enough for me to use it in a recipe I want to try. The plant growing around the pots is Mexican bush sage.