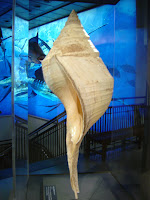 In the fall of 2007, we went to the Houston Museum of Natural History to see the Lucy exhibit. (Or as my husband put it, "Why are we going to see old bones?") Since we were there anyway, we naturally toured the rest of the museum exhibits, including the one pictured above, which is labeled as the world's largest seashell. I took the picture because I loved the way the white and blue looked together, and when I posted the picture to my web hosting site, I of course titled it "World's Largest Seashell". Now if you do a Google image search for "world's largest seashell" or any of several variations thereof, the first picture you see is mine.

It's my one and only claim to fame, because I lead an otherwise boring life. What usually happens in my life is more like this:

I work with young children who just can't get the hang of speaking correctly. Some of them have a condition called childhood apraxia of speech, which simply put means that for them saying the simplest sentence, like "I want cookie", is as difficult as reading Fox in Socks while mildly drunk is for the rest of us. Remediation consists largely of trying to make constant repetition seem remotely interesting to the childish intellect.

D had trouble learning the pronouns "I" and "you", so even getting "ahwan" (I want) was pretty cool, and often got him the car. One day, the ladder came off the fire engine (fah en). "Don't worry", I reassured D. "I fix it."

My jaw hit the table. Not only three whole words, subject-verb-object, but he used the right pronoun. I went over to my desk to write it down before I forgot.

A little voice drifts over from the play table. "You writing?"

"Yeah, I writing so I don't forget." I crying, actually. I get emotional over little things.

Little things like having the number one hit when you Google "world's largest seashell". It's my one and only claim to fame.


ETA: Another of my adventures with little D can be found at my post Seeds. 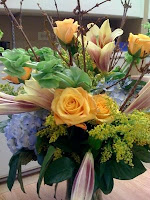 Posted by Coleslaw at 8:59 PM No comments:

People keep telling me that once something is published to the internet, it is never really lost, but you can't prove it by me. In the last 18 months or so, I upgraded both my home and my work computers. In the process, I lost two articles I wrote, despite the fact that I had multiple copies at one time. One of them had been published, first on a friend's blog and then in the Denver Post. I have a hard copy, but it's in a frame, which makes it a little difficult to retype. No worries, I think, after all, nothing is ever lost on the internet. Except when it is. Despite multiple searches, not only the Google kind but searches of numerous CD's, floppy disks (remember those?) and Zip disks (remember those?), I can't find it. So I actually took the framed version down from the wall and retyped it, and will post it when I find a suitable picture to go with it.
The other one, my infamous Twelve Steps for Parents of Teens and Young Adults, was almost published, too, as a sidebar to a parenting article, but then Columbine happened and they didn't seem quite so funny. I can probably recreate them, except now that my son is 31, the urgency just isn't quite there.
Maybe I can come up with a Twelve Steps for Wives of Engineers, instead.
But speaking of lost and found, while looking for a suitable picture for this article, I ran across an old picture of my cousins and brothers and I when we were very young. Now it's on the internet. Let's see how long it lasts.
Posted by Coleslaw at 7:48 PM 2 comments:

I wrote this in 1990 for our local newspaper, and got paid a whole $15 dollars. It is one of two pieces of writing I have been paid for.

When I was a graduate student at Tulane University, I belonged to an interracial dialog group. It was known to its participants as “the group”, whatever its official title may have been, and was started to promote an exchange of views between blacks and whites, as we called ourselves then. I don’t know much about the group’s formation, having joined after learning about it from my landlord and landlady, who were already members. It was my impression that it was started by a sociology professor at Tulane and that there may have been others involved.

The group was not only biracial but multigenerational, multi-religious in that there were Catholics, Jews and Protestants, but no Muslims, Hindus, Buddhists, a fact that probably reflects the religious makeup of New Orleans in 1968 rather than being a deliberate oversight, and included both sexes and several social classes. I don’t remember all the occupations represented, but there were a few folk who worked for a local television station, a social worker, a medical technologist, the college professor, a few graduate students, several homemakers, a teacher, a Protestant minister or two, and a Catholic priest who subsequently became a bishop and who foreshadowed his hierarchical bent by trying to impose some structure on our otherwise loosely organized meetings through various sensitivity games.

When we weren’t humoring him in this, we mostly just talked, not only about topics that were specifically racial, but also about such things as the war in Vietnam, flag burning, self-esteem, and education. I don’t remember how we chose these topics or who chose them.

I do remember learning in a hurry that petite young women with soft voices get ignored in group discussions unless they learn the parlor equivalent of street fighting tactics. To this day one had best not interrupt me if I have the floor.

The assumption behind the group’s formation was that by talking to each other we would learn to overcome prejudice and understand each other’s point of view. My impression was that with some colorful exceptions, most participants were attracted to the group because they were already as free of racial prejudice as it was possible to be in a racially segregated society, although one valuable lesson I learned was how much racial prejudice that description allows for. Yet when our discussions veered off, as they so often did, to the mundane and personal, it was interesting to see how often they broke down along generational, religious, gender, or purely idiosyncratic lines, and, of course, interesting to see how often they did not.

My most vivid memory is of a discussion of infidelity that would have confirmed the most rabid Klansman’s preconceptions. All the married white men in the group insisted their marriages were built on such exquisite trust that they would never feel right cheating, while the black ones felt it was OK for themselves, though not their spouses. It is a measure of just how young and innocent I was that I did not notice that the real dividing line between the two groups was that the first group’s wives were all present and the second group’s wives were not. Years later it finally occurred to me to wonder what the latter group of wives found to do on the nights when the group met and whether it had anything to do with sauce for the gander.

Since those days, I have been in a consciousness raising group, a a marriage encounter, various singles groups and a support group for battered women. I have marched with my sisters at ERA rallies and escorted patients across picket lines at women’s health clinics; I have taught an adult Sunday School class and chaired a United Methodist Women’s circle. My life has not lacked for lively discussion and group support.

Yet all of those groups are stratified along gender or religious or political lines, and too many of them along age and racial lines. I miss the old group. I miss a place in my life where I can meet with people who have nothing in common but the language they speak and the air that they breathe, and share what it means to be human and perplexed by the problems we all face.
Posted by Coleslaw at 8:45 PM No comments: