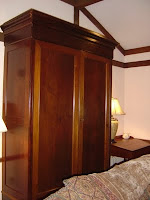 Beware of things you get for free. The above armoire is a case in point. My mother-in-law's cousin had a tenant who decamped in the dead of night, leaving the armoire behind. The cousin gave it to my mother-in-law, who lived in an old house with minimal closet space. MIL covered it with a dark stain-varnish combination and used it for storage in her bedroom. When MIL sold her old house and moved into a retirement community in our town, the armoire moved with her.
Eventually MIL needed more assistance than was available in the retirement home and right after her 90th birthday, she moved to Tennessee to an assisted living facility near her daughter. Hubby and I shipped the armoire at a cost of $450. Sis-in-law spent another 3000 or so having it professionally refinished, and it found a home in MIL's room at the assisted living facility.
A year or so later, MIL died, and SIL decided that she didn't need the armoire, and found a moving company to bring it back to us at a cost of $1400. This brings the cost of the "freebie" up to around $5000 if you throw in the cost of the original can of mahogany stain. Of course, since we are hoping to sell our house and move to Texas, we are not only going to have to pay to move it yet again, but also pay the difference between the cost of a house with 8 foot ceilings and a house with taller ceilings, because the armoire is 8 and a half feet tall.
The sensible thing to do would be sell it, but hubby has loved it since he was a child and isn't going to part with it. The second most sensible thing to do would be retrofit it as a TV armoire or bar or entertainment center, but hubby won't do that, either, because that would destroy its monetary value, although how something you are never going to sell can be said to have monetary value is a mystery to me. So at the moment it sits in our living room, taking up wall space, holding Christmas decorations, and looking pretty.
So I have taken to calling it the Precious, as Gollum called Sauron's ring in the LOTR. It's hard to get rid of, and it can actually make you disappear since it's big enough to stand in. I have to admit, it's starting to grow on me. Isn't that a bad sign?
Posted by Coleslaw at 4:42 PM 2 comments:

Lying on the floor to take a picture of the dancer's feet sounded like a better idea than it was.
Back in June, the place where I work held our annual summer art program for special needs children. They got to take classes in pottery, dance, painting, music, and multimedia, and on the final day, we held our big exhibition. The program is co-sponsored by the Junior League, and they work extremely hard on it.
This year, one of the Junior Leaguers took pictures. I don't know if she is a professional or just a dedicated amateur, but she had some very fancy looking camera equipment, which amazingly enough, kept working despite my constantly drooling over it. For 4 days, she took pictures of the child artists at work.
Friday, I brought my own point-and-click camera to take some pictures for my own use. My boss asked if I could take some pictures of the kids because our Junior League photographer hadn't brought her camera. Since the kids were getting their faces painted for the big performance, I took pictures of them all in their warpaint. Alas, I can't post them, for privacy reasons, but the pictures came out seriously cute, especially since I have lost my fear of getting down on my creaky knees to catch them at eye level. I made up a CD of the faces pictures and a few others I thought she'd like for my boss.
The week after the program ended, I got an emergency request from the coworker who runs the program. She needed four pictures to include with a report she was preparing for a funding agency. The CD of pictures she got from the real photographer had something wrong with it, and she couldn't use any of the pictures on it. Could she use mine? Of course, I said yes. And began the giggling, chortling, and snorting reported above.
I don't know if they ever got a good copy of the "real" pictures. I'm certainly enjoying mine.
Posted by Coleslaw at 10:42 AM No comments:

Poppy (in the drawer) and Squeaky in their younger days
Squeaky had always been a calm, quiet cat with the high pitched voice that led my husband and son to give him his name. Unlike our other cats, he preferred to stay indoors, except sometimes in the spring, and one year when he went outside a few days after Easter and stayed there, in the yard, until July. We acquired him a year or so after our marriage from some clients of mine who had a barn cat mama. I made his acquaintance when his eyes first opened and he began exploring the yard and peeking through the back door at me, and his mom's owners were only too happy to let me take him home.
About three years or so ago, Squeaky's kidneys began to fail, and in the last few months, he got skeletally thin. He began having accidents in odd corners, did not appear to be able to see, and started falling asleep near the food dish in the kitchen. I kept telling my husband that we needed to have him put down, but it's hard for my tender hearted husband to let go. I finally realized I'd have to make the decision on my own. On August 4th, we said good-bye to Squeaky.
To make matters worse, a week before we'd noticed that Poppy, our second oldest cat, had acquired a lump on her hind leg. We thought it was an abscess and took her to the vet, but it couldn't be drained. After some expensive X-rays, the vet operated and did a biopsy. The lump turned out to be cancer. The good news is that it is a kind that is unlikely to spread to her vital organs; the bad news is that it can grow large enough to interfere with her mobility. The vet can refer us to an oncologist to see if Poppy is a candidate for radiation therapy, which will require her to be sedated and cost 3-5,000 dollars.
We have some time before we need to make a decision. Right now, she seems unbothered by the lump. She was far more bothered by being restricted to indoors following the surgery, but she's now allowed her usual routine of napping in the garden and chasing lizards. She has really been so patient through all this, although this morning when she was due to go back to the vet to get her staples taken out, she managed to hide behind a bookcase for half an hour or so. I have to stop telling her when she's due to see the vet.
Down the road, we may need to look at her age, the cost, the likelihood of the radiation working, and the inconvenience to Poppy, and make some hard decisions. Cats, unlike people, can't make their end-of-life wishes known. They trust us, and we hope we don't fail them.
Posted by Coleslaw at 2:49 PM No comments: 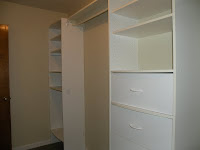 But as one of my co-workers reminds me, it really only takes one person to want it for it to be sold. So for the moment we are keeping our hopes up and the house relatively clean and presentable. You never know.
Posted by Coleslaw at 8:40 PM No comments: