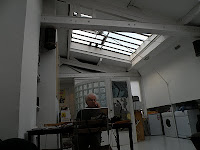 Okay, this is how it really went down. My son's job takes him to out-of-town locations for weeks or months at a time. His most recent job has him spending four months in Paris. Meanwhile, I get a week off from work every year at Easter. Back when my husband and I got married, it was two weeks, so we got married the day before Palm Sunday and had two weeks free for our honeymoon. We went to Paris, Florence, and Rome.
Even though Easter is a movable feast, some part of my spring break often coincides with our anniversary. We also often take trips at that time, since it's not too hot, not too cold and I have the time off anyway. We went to Hawaii for our 18th and the Caribbean for our 19th.
So what could be more appropriate than to use my break this year to take a trip to Paris to visit my son, who has rented a charming apartment, a former artist's loft, where he could put us up?
I tracked down airline fares, and found a flight that could get us to Paris early Saturday morning, so we'd actually be able to spend the weekend with Neal before he went back to work and left us to our own devices. I found a shuttle service to take us back and forth from the airport at half the rate of a cab, having vetoed my husband's idea to take our baggage on the Metro. I emailed Neal our exact itinerary.
Men are amusing. The Sunday before we left, my husband turned to me in church and said, "Don't we have an anniversary coming up soon?" "Yes", I replied, "Friday. The day we leave for Paris." Two days later I saw a note on Facebook that Neal was having a party at his loft Saturday night. I emailed him to say that while we were delighted that he wanted to throw a party to welcome us to Paris, we were going to be a bit jet lagged. It turned out he thought we were coming in Sunday. (Note to the young: read those emails from your parents.)
It all worked out well. Neal found us a hotel to stay in for our first two nights in Paris. We spent a few hours at the party, which I hear didn't break up until 3 AM. And now I can tell people that for our 22nd anniversary, my husband took me to Paris, where my son threw us a party.
Posted by Coleslaw at 6:38 AM