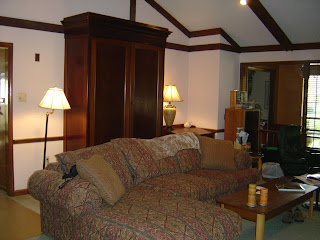 One of several rooms that could use a makeover


I have more than enough rooms that could benefit from a makeover (all of them, in fact), but I see a problem with my applying to be on the show. I just do not speak HGTV's language.


First of all, when homeowners are asked how they want their finished room to look, they are obligated to say "warm and inviting". Notwithstanding that "cold and forbidding" as a design style went out when people stopped building medieval castles complete with moats, it is considered necessary to say you want your room (oh, excuse me, "space") to be warm and inviting because it's not the sort of thing that someone who spent years studying design could be trusted to think up on their own.


It is also necessary to state that you want your roo - uh, space, to seem  both cozy and spacious. Of course, you can't say both words together like that so that everyone will recognize how impossible that is. You have to use "cozy" in one sentence and "spacious" in the next, or better yet, the one after that.


Furthermore, it is important for some reason to want your whole house to "flow". Where, I don't know. A few months after Hurricane Katrina, my husband and I went to New Orleans to look at the neighborhood where he grew up. We met a woman who was standing by the foundation of her former home. The slab wasn't even left, just the footings that the slab had stood on. I do not want my house to flow anywhere, thank you. I think houses should stay exactly where you left them last time you saw them.


People also seem to be willing to spend outrageous amounts of money to make their bedrooms look like hotels. I do not understand this. I have never been in a hotel that makes me think, "I want my house to look just like this." Partly that's because we mostly stay in places like Comfort Inn when we travel, but even our $450 a night room at the Hermitage Hotel in Nashville, while lovely as hotel rooms go, didn't make me think, "I want my bedroom to look just like this." It just looked too anonymous, like a hotel or something. Of course, I did like the view, but it's not like I could take that home with me.


The other thing that amazes me is how much money people spend on kitchens. Fancy kitchens don't say "rich" to me. Fancy kitchens say "If I were really rich, I'd hire a cook and wouldn't care what kind of dump I stuck him or her in, but I'm not so I did this instead."

While we're on the subject of what rooms "say", I should note that some designers, like Candace Olsen and Sarah Richardson, always want their design elements to speak to one another. The mirrors speak to the windows, the rugs speak to the curtains, the chairs speak to the sofa. They don't even need people to have a party. If it were my house and I heard all those objects speaking to one another, I'd check myself into a psychiatric facility.

And no matter how high end that facility might be, when I got home, I wouldn't want my bedroom to look like it.
Posted by Coleslaw at 3:58 PM