Last Friday I was driving to a doctor appointment when I was suddenly hit by a feeling of depression. It was a mix of sadness, hopelessness and pointlessness that seemed totally unconnected to anything going on in my life. The appointment was a routine one for a Boneva infusion, not for illness. After the appointment I was going on to meet friends for lunch at a favorite restaurant and then to pick up my badly-missed laptop from the Apple Store and hang around to buy an iPad2. So why were my feelings so out of line with the day I had planned?


At that point my unconscious, which had been frantically trying to get my attention for a few minutes, broke in and reminded me what had happened earlier that morning. I had awoken to the radio and heard something about tsunami warnings in Hawaii. I found my husband, up early doing his laundry, and asked if he knew what had caused the worry about tsunamis in Hawaii, and that's when I found out about the earthquake that had hit Japan. Unlike most people, I was not glued to the news that morning while I organized the details of my day, but it wasn't hard to figure out that large dense population plus island location plus earthquake equals disaster. I wasn't prepared for the scope of that disaster, but I don't think anyone stateside was at that point.


Later that morning when I saw my sister's one word Facebook post, "CRAP!", I remembered that my nephew, who is in the Army, had just been sent to Hawaii. (Later that day he texted that he was okay.)


The incident reminded me of the last time I had sensed a disturbance in the force.  On June 11, 2001, two days before my 54th birthday, I woke up with that same feeling of sadness, hopelessness and pointlessness, and again, there didn't seem to be any reason for it. I was looking forward to my birthday. It was Monday, but I generally didn't take Mondays that badly. Only later, driving to work and hearing that Timothy McVeigh had been executed earlier that morning did I understand what had hit me. Not only was the sorrow and outrage of the Oklahoma City bombing brought back to me, but also sorrow for McVeigh.


Let me explain that. Despite my reservations about capital punishment in general, I can't dispute McVeigh's execution. If anyone is going to get the death penalty for a crime, a mass murderer of 168 people, nineteen of them children, should be the one. My thoughts about McVeigh do not run along the lines of "the poor baby". My sorrow was more a generalized sorrow for any young person who makes choices that ultimately force society to protect itself from him. I wonder if there was some point at which he could have been put on a better path, some person who could have intervened, some set of circumstances that would have averted the entire tragedy and spared all those lives. You can't reason with or influence tectonic plates. I would hate to think that people are ultimately just as driven by fate and impersonal forces. 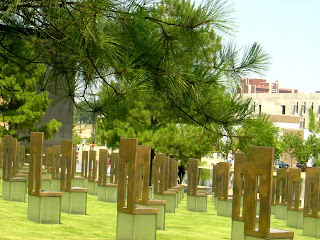 The empty chairs, Oklahoma City Bombing Memorial
Posted by Coleslaw at 10:17 AM