Recently I received a request through Flickr from a student who wanted to use my photo of a cladoselache fossil in a report she was writing for school. The only fossils I could think of that I had taken photos of were the ones at the dinosaur exhibit in Lafayette, and none of them were of something called cladoselache. Some of them were untitled, and one I had titled “Marine Fossil”, so for all I knew, the student had recognized one of those as cladoselache. I shamefacedly admited to not knowing which picture she meant, and gave permission for her to use it if she would tag it for me.

It turned out that the picture in question was in an older group of pictures taken at Moody Gardens Aquarium in Galveston, Texas, and I had in fact titled it Cladoselache because the name was displayed prominently in one of the pictures I took. Like many people with digital cameras, I have more enthusiasm than skill, and take a lot of pictures, which I then post to Flickr and apparently promptly forget.

I like to encourage the young, however, so I was happy to email her a copy of the picture to use. In exchange, she offered me a copy of the finished paper. I accepted, since I am hoping fervently that her paper is based on orthodox science and not a claim that the fossil is the result of Noah’s flood. I couldn’t think of a polite way to ask.

Now I need to think of a tune to use to remember the word “cladoselache”. I became aware of the usefulness of music as a mnemonic device while reading an article by Isaac Asimov about the molecular structure of the molecule para-dimethylaminobenzaldehyde. Asimov explained how each change in a benzene ring led to each prefix and suffix in the name, as a larger lesson on organic molecules. Then he told a story about how he was traveling one day and began singing the word  “para-dimethylaminobenzaldehyde” to the tune of The Irish Washerwoman. A woman sitting near him exclaimed, “You know it in the original Gaelic!”

I cannot for the life of me tell you what para-dimethylaminobenzaldehyde is*, but thanks to The Irish Washerwoman, I have never forgotten the word.

Another musical mnemonic I use, with a more practical application, comes from Mr. Rogers Neighborhood. In Episode 1105, Baby Ana, the platypus, is given her name, short for “ornithorhynchus anatinus”.  Handyman Negri writes her a song based on her name. I searched diligently online to try to find a video or audio of the song, and couldn’t. So you will just have take my word for it that the words

can be replaced with

So what is a cladoselache, you ask? I don’t know. I’ll have to wait until Monday to find out. That’s when the paper is due. 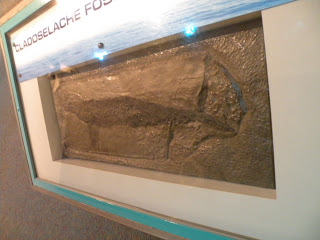 *other than that it is an aldehyde and see correction below.