Here's a Tip. Learn Some Math.

Like many other people, I have been following the story of the Applebee’s waitress who posted this picture online, and subsequently was fired. The diner, who identified herself as a pastor, wrote, “I give God 10% Why do you get 18” on the receipt. 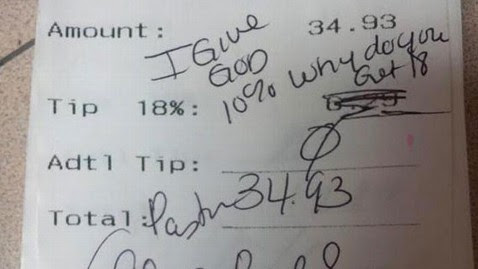 I can’t claim to have read everything written on the subject, so perhaps this point has been brought up before, but while I have seen people challenge both the pastor’s and the waitress’s ethics in this incident, I haven’t yet seen anyone challenge the pastor’s poor grasp of math.

If the pastor is doing it right, the 10% she gives to God is 10% of her income. The 18% she gave the person who waited on her (and according to some accounts, she did pay it), was a percentage of her bill for dinner. I suspect the latter amount is less than the former. Otherwise, we need to call in Gail Vaz-Oxlade.

I did some Googling to find out how much people in the US spend on food and especially, on dining out. We in the US spend a lower percentage of our incomes on food than people in other countries do.  Estimates vary, and the lower your income, the higher the percentage of it you will spend to feed yourself, so let’s take the higher end of the range and say that the pastor spends 15% of her income on food. It’s unlikely she spends all of it eating out, but let’s say she spends half of it eating out, just to be on the safe side. If she tips every waitress 18%,  we multiply 7.5% by 18% to see what percent of her income she spends in tipping. Those tips amount to 1.35% of her income, far less than God is getting.

From other Googling I have done, I see many people report spending anywhere from 2-5% of their income dining out, though some spend more. If we use the 5% figure, 5% of 18% gives us 0.9% of the pastor’s income going to waitresses (and waiters), less than one tenth of what God is getting.

But just for fun, let’s assume that the pastor, like the average Kenyan, spends 45% of her income on food, and that all of that is spent dining out (unlike the average Kenyan, I suspect). That would mean all her tips add up to 8.1% of her income, still less than God is getting. In fact, our pastor would have to spend over 55% of her income eating out for the 18% tips to equal God’s 10%, and if you spend more than half of your income dining out, then don’t blame the waitress for your cash flow problems. Learn to cook. Maybe clip coupons. And don’t write notes to the cashier on them, just in case she has a camera, too.
Posted by Coleslaw at 5:55 AM