The Baton Rouge Zoo began with an elephant, actually, two elephants. Planning for the zoo began in the 1960’s. A local television personality, Buckskin Bill Black, helped campaign for the zoo, ending his morning children’s program each day with the words, “Baton Rouge needs a zoo.” After taxpayers passed a millage election that provided more than three-quarters of a million dollars to build the facility, Buckskin Bill urged his little viewers to donate their pennies to help purchase an elephant. Two elephants were found for the zoo, and given the names Penny One and Penny Two.

I don’t know what hapened to Penny One and Penny Two, and but the most recent elephants owned by the zoo were Judy and Bozie, both female Asian elephants. After the zoo remodeled its big cats display to give the tigers more room to roam in a more naturalistic setting, the next step was going to be remodeling of the elephant’s habitat, to include more shade, a pavillion where visitors could stop and rest, and a fountain. A sign was placed opposite the elephants’ habitat, with a thermometer graphic to show how much money had been raised toward the project. The sign stayed exactly the same for years.

Meantime Judy, the older elephant, struggled more and more with her arthritis. Part of the time she wore a specially constructed boot to take pressure off her foot. A few months ago, the sad decision was made to put Judy down. 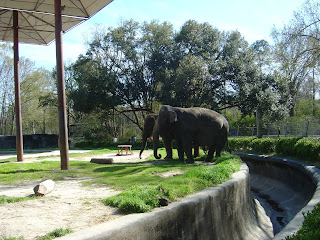 Elephants are sociable animals that do not thrive in solitude. With Judy gone, Bozie needed a companion, more than one companion it seems.

The Baton Rouge Zoo's elephant exhibit built in the late 60's is no longer considered state-of-the-art for a variety of reasons.   While our current exhibit exceeds the requirements to house two elephants, it cannot accommodate more than two.  The Association of Zoos and Aquariums* (AZA) now requires accredited zoos holding elephants to have a minimum of three elephants.    We now know elephants need to be kept in larger, more social groups and as a result, most new elephant exhibits have the capacity to house at least 5 and some as many as 12 elephants. (http://www.brzoo.org/index.cfm?md=newsroom&tmp=detail&articleID=625)

So Bozie is being sent away to live in a newer elephant facility at the Smithsonian Institute’s National Zoo in Washington, D.C. She will live in Elephant Trails, an exhibit capable of housing 10-12 elephants.
The Baton Rouge Zoo still has plans for elephants, but it will be a while before there is a space for them again. The current habitat does not have room for three elephants. The big concrete moats that surround the old elephant exhibit to keep the elephants away from the fence where visitors congregate are no longer considered a good idea. Modifications also need to be made to provide greater occupational safety for the zoo workers who handle the elephants. The BREC Foundation and Friends of the Baton Rouge Zoo boards have developed a steering committee to initiate a capital campaign to develop a new modern elephant facility.
It was strange to be at the zoo Sunday and not see the elephants, but easy to see a new facility is needed. The zoo originally took almost ten years from the first plans to the opening day, and five years from the tax election to opening day. It could be ten more years before Penny One and Penny Two’s successors roam the savannah of Baton Rouge.
But Bozie has companions again, and a larger, nicer home. Farewell, Bozie, and fare well.