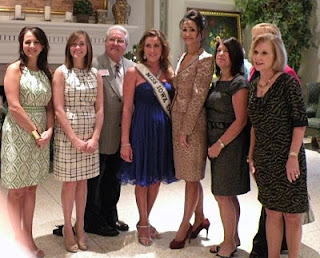 Abbey is the one in blue.
Every September for the past nine years, the small non-profit organization I work for has held a fundraiser breakfast. For the first seven years we had the usual run of motivational speakers, including one who was informally voted Worst Speaker Ever. Last year we had the good fortune of getting D.J. Gregory, author of  Walking with Friends, as our keynote speaker, and everyone was mesmerized. One of our board members noted, "I can listen to Dale Brown at practically any meeting I go to, but I don't get to hear speakers who have disabilities."


So this year my boss tried to get Temple Grandin, but that fell through. Instead we found Abbey Curran, Miss Iowa-USA 2008. Abbey is your ordinary, run-of-the-mill drop dead gorgeous beauty queen with cerebral palsy. When Abbey entered her first beauty pageant, one of her teachers tried to discourage her, saying, "Abbey, be realistic." As the parent of one of my little ones noted, "I'm surprised she would say something like that. Was she trying to get sued?"


In addition to being gorgeous, Abbey is a very funny speaker. She talked of growing up on a hog farm and how all her friends envied her. Abbey also talked about her first beauty pageant, and how worried she was that she would fall getting to the stage. She was proud to report that she didn't fall, but her dress did – right to her knees.


(I'm not sure whether to believe that story.)


I didn't exactly stalk Miss Iowa, but what with one of my co-workers taking official pictures, the news people taking pictures, and several of the organizers taking pictures, I had to squeeze in where I could to get a few blurry, badly lit shots. She didn't seem too upset.


Later that evening, my husband and I went out to dinner. At the next table I heard a woman saying, "I gave them a donation. They showed a video that really tugged at your heartstrings. And the speaker was from Iowa. She won a beauty pageant." Small world – she had been at our breakfast. On my way out I thanked her for her donation, hoping all the while I didn't still have hot wing sauce on my face.


I wonder about the Abbeys of the world. What is it that makes some people say, "I can do that" when everyone else is saying, "Be realistic"? Are people born with that kind of confidence and determination, or do they develop it as they grow? Just being gorgeous isn't enough to win you a beauty contest. You have to enter. You have to show up.


You have to be willing to risk falling on your face.
Posted by Coleslaw at 7:19 PM