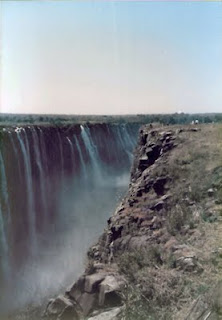 Mosi-o-Tunya (the Smoke that Thunders), also known as Victoria Falls
In 1986, I went to Zimbabwe on an Earthwatch Expedition.  About a year after I came back, I tried to write a fictionalized version of my trip for a short story contest, but gave up about halfway through. I tried to revise what I had written for a blog post, but that would have required writing it from scratch, so I decided to post the part of the story I had written as two blogposts, and then finish with an account of the rest.
Alien Landscapes
My story begins in the middle, as so many of my stories do, with a dream. I dream that aliens are planning to take over the earth. I am the only one who knows this, and have been knowing it (as we say in these parts) for some time, although I do not know how I know. One night, as I stand on the front lawn with my young son, I see an explosion on the surface of the moon. “It is them," I think. “It has begun." (In the world I will wake up to, it is February, 1986, with the Challenger explosion only a few weeks behind us.) I don’t tell anyone of the impending invasion. Who would believe me?
Even before the alien ships arrive, odd things begin happening on the earth, things I know are part of a campaign to weaken and disorient us. There is the night, for instance, that I listen to my radio and hear a bulletin announcing that bears have escaped from the zoo thirty miles away. Seconds later, they are on my front lawn. My son and I lock ourselves in and call the police. “The aliens did this,” I think, and am frightened.
When the aliens arrive, they look like humans and act like slightly demented social workers. They have come with the idea of being helpful, actually, but it is their own idea of helpfulness, which involves protecting Earthlings from any form of vice, emotion, fun or power. Cars are soon forbidden, as they cause accidents, clog up the atmosphere, and take people to places where trouble can be found, indeed, sought after. Alcohol, of course, is outlawed, as is chewing gum since it gets thrown away and sticks to people’s shoes. In short, they are tyrants, but tyrants of a cheery, smiley sort. We Earthlings plot revolt.
One day (in this dream) I arrive home and find a smiling blonde alien removing my stereo to the attic. “It makes noise. You don’t like noise,” she says as she steals my property. I realize suddenly that it is she, the alien, who does not like noise, is in fact terrified of it. I have the weapon I have been seeking. We Earthlings will use noise to defeat the aliens.
And that is where I woke up. I cannot tell you, although I wish I knew, whether we retook Earth, and it doesn’t matter to the rest of my story.
What intrigues me about the dream is its plot - I remember few of my dreams and those I remember are formless, filled with the abrupt changes of place and character we call “dreamlike”. I analyze and reanalyze the dream, fitting first one, then another of the significant and insignificant people in my life into the role of aliens, finally coming to the unsurprising conclusion that the alien is myself.
And who am I, myself? I am a woman, middle-aged but with a young son, in comfortable but not affluent circumstances, educated, a professional. I think of myself as a poet or an artist even though I haven’t written poetry in years and the greeting cards I draw I never send. My physical appearance doesn’t matter to this story and eludes me anyway: the woman I see in my mirror is not the woman I see in my mind. I avoid mirrors with the determination of a vampire. No doubt it is in revolt against my overwhelming ordinariness that I want to see myself as an alien.
In the waking world I am planning a trip to Africa. I have been daydreaming of this trip for two years, although I cannot afford to go, and my friends smirk knowingly whenever I mention it, as parents do when their children say, “When I grow up, I’m going to be an astronaut,” or movie star or president, though some of them will grow up to be those things. I feel like a child in a world of adults these days, powerless and discounted but precocious.  It is no wonder my dreams have taken a strange form.

At this point my ex-husband announces that he is about to remarry and wants to discuss buying out my share of our still jointly owned home. “Good, “ I say. “Now I can go to Africa.” This is not the response he is expecting. I no longer know what he expects; he is another alien in my life, almost another species. My memories of our marriage seem less real than my dreams of marauders from another planet.
As it turns out, his plans to buy my house fall through. “I guess,” he says in tones that are either warm and sympathetic or outrageously smug, depending on which one of us you are, “this means you can’t go to Africa.”
A week later I call the travel agent and send off my deposit.
This trip is not a tour or even a safari. I am going as a volunteer worker in a project that will study the lives of tribeswomen in a newly emerging democracy, specifically their health status during their pregnancies. In fact, I am paying my way there and a hefty sum besides so that I can spend two weeks working, but I actually prefer the idea of having a focus to my trip to aimless touring, and the tasks sound enjoyable or at least not onerous.
In the meantime, I have six months to get my passport, save up my money, and babble to complete strangers in grocery stores about where I will be going and what I will be doing there. My friends keep asking me when I will be leaving and soon assume I must have gone and come back; my actual departure becomes something of an anticlimax for them. Time passes, as it always does, and I am on a plane bound for London, thence to Harare, my dream all but forgotten, my son stashed safely with his grandparents, my luggage crammed with items half of which prove to be unnecessary, and my mind prepared to be impressed.
Posted by Coleslaw at 2:41 PM