One of my holdovers from my childhood is getting a new Easter outfit. Being one of five children meant not having a lot of money for clothing. Often I got hand-me-downs from a cousin who lived in a more urban area and wore clothes that did not fit my personality or the styles at my school. Easter, however, always meant new clothes, not just a new dress or suit, but hat, shoes, and purse as well. Even now that I can buy clothes whenever I want, it's a custom I like to keep. More often than not, I find myself the only person in church over the age of three wearing a hat, but so what. I like hats.


So Saturday I went shopping for a dress. Hubby wanted to go to Penney's for some new jeans, and had a fifteen percent off everything coupon he had earned by taking a customer survey, so I started there.


Penney's had hundreds of dresses in misses sizes, but in the last three years or so, my weight has crept up into women's sizes, and four steady months of exercise have not caused much of a change. The selections in women's sizes were not nearly as extensive, and the dresses I did like were not available in my size. After fifteen minutes of searching the racks and another fifteen minutes of waiting on line for the dressing room, I found one that did fit. It had a print of enormous yellow flowers over a black background and a fabric mix that included spandex, which did not have the slenderizing effect the designer intended, but it fit.  I found hubby and showed it to him. He took one look at my face and knew I was not crazy about the dress. "Why are you going to buy it if you don't like it?" Good question. I put it back on the rack.


"Do you want to go somewhere else?" hubby asked. I decided on Lane Bryant, in a strip shopping center across from the mall. They had a comfy chair for hubby to sit. They also had a line for the dressing rooms. I tried on three dresses and two of them fit. The third one was the one I liked best, but it was snug around the midriff. As I stood on a long line to decide whether to buy one or both of the first two, hubby's question came back to me. I left the dresses in the store.


My very patient husband took me to one more place, where I found the dress I had been looking for. It was pretty! I liked it. I wanted to buy it. And it was designed by a genius. Princess lines skim over my problem midriff, and the pattern is a black and white print except right around the hemline, where a row of 5 inch red flowers blooms. Four months of exercise have left my legs looking great, even if they haven't budged my tummy. The flowers are in the perfect spot to highlight my legs.


Besides I have two hats, one red, one black, to choose from to wear with it, and a black and white patent purse. I even have a pair of strappy black sandals that will do.


The problem is, what I really want is a pair of red espadrilles. Try finding a pair of orthopedic espadrilles sometime. Something like these would look perfect, but to wear them I would have to sell my soul to Satan for a new pair of feet. Come to think of it, not only a new set of feet, but new knees and hips as well, and if I'm going to bargain my soul away for that, I might just as well ask for the body I had at 25.


Then I could buy any dress I want. 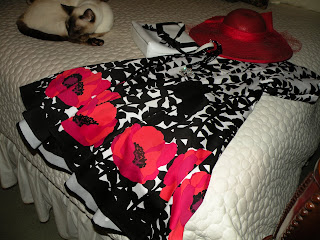