Truffle is a warm and friendly cat with me. He is especially warm and friendly when everything is going his way: when I feed him his treats, when he gets to snuggle on the electric blanket, when he’s sitting on the edge of my chair getting his ears scratched.

He is not warm and friendly when he has to see the vet. That’s when he turns into 13 pounds of snarling muscle. At least, I think he weighs 13 pounds. At his most recent check-up, last week, it was impossible to get him on the scale. It was impossible to take his temperature. It was just possible to give him his shots with both vets and one assistant holding him down. Dr. Kate was also able to check his heart rate while he was wrapped in a towel snarling at us. “You would think his heart would be racing, “ she said, “but it’s not.” Great, I’m the mom to Hannibal Lector cat.

So I decided that since I am retired and have time for these things, I would make the vet some homemade goodies for Christmas. The vet’s office is less than half a mile from my house, so it was no trouble to drop something off. And what could be more appropriate than homemade truffles? Made with dark chocolate and decorated with white chocolate and chopped macadamias, they would reference our black and white cat, D’Artagnan, as well. Isn’t that how cute?

I have a recipe for no-cook chocolate truffles, but I decided to try something new, specifically, the Chocolate Truffles Recipe from the Simply Recipes website. It looked easy, especially if I skipped the optional flavors and went with basic vanilla. I could roll one third of them in cocoa, one third in chopped macadamias, and drizzle one third with melted white chocolate. How easy is that? as Ina Garten would say.

I keep forgetting that Ina Garten is a professional chef, and I’m not. Still, the recipe is easy. However, it does not make as many truffles as the recipe says: I was only able to make 25 of the size shown. It’s also harder to roll the truffles into balls than it is with my no-cook version. We have a melon baller someplace in the attic that would have made the job easier, but if I went to look for it I'd be there until Easter.

After they’re formed, the truffles have to sit in the refrigerator overnight before you can roll them in toppings. They aren’t really hard to make, just fussy.

Rolling one third of them in cocoa was easy. I was even able to round them off some more. Rolling in the macadamia nuts was harder because no matter how finely I thought I had them chopped, I’d keep finding big pieces that wouldn’t stick. Drizzling with white chocolate was where I ran into trouble. I had to guess at the proportions of cream and baking chips that would let me drizzle yet still harden as it cooled. I guessed wrong. Even worse, my attempts to drizzle a few lines over each truffle resulted in blobs rather than stripes. 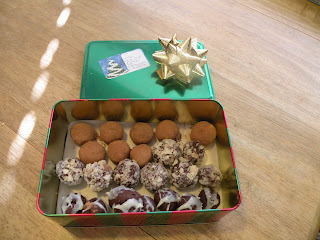 Okay, they are homemade, right? We aren’t going to worry about the little stuff. I packed them into a tin and took them over to the vet’s office. “Thank you”, said Kim, the receptionist, as I suggested she might want to keep them in the refrigerator. “What are they?”

“Truffles,” I answered. A brief puzzled expression passed over her face and then she realized I meant the candy and opened the box. (After all, I’m the mom to Hannibal Lector cat.)

So I think Truffle will be welcome there for another year, but next year, I'm sticking to cookies.
Posted by Coleslaw at 8:53 AM