January 19 was Dolly Parton’s birthday. On January 19, I was not much worried about Dolly Parton, writer of the Oscar nominated song Travelin’ Through, because I was on my way to Lafayette, Louisiana with my husband, who was attending a conference there. He was going to be gone overnight, so I decided to tag along and find ways to amuse myself.

I put “seeing bones older than mine” on my Lafayette to-do list and went. I got there to find a few busloads of school children lining up outside. Several of them waved at me as I walked to the door, and one of them held the door open for me.

Admission was $5, but senior citizen admission was only $3. I didn’t realize what a bargain that was until I got inside and saw the first item in the exhibit - the world famous T-Rex skeleton from the Museum of Natural History. The last time I saw that I was the age of the children on the buses. 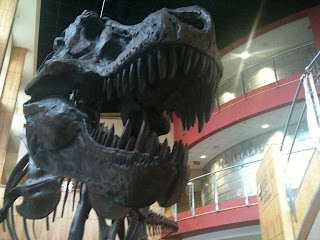 I hadn’t brought my camera because I didn’t think the museum would allow picture taking, but they did. I took what dim and blurry pictures I could with my handy iPhone. Since Lafayette is a little more than an hour from my door, I may go back before the exhibit closes March 11th and take some better shots, and just look at it again.

A large part of the exhibit dealt with new discoveries in the biomechanics of dinosaur movements. There was a 1/10 size model of a T-Rex walking

and a huge metal diplodocus skeleton designed by computer software that was first developed to model how the diplodocus may have moved. Three large screens showed pictures representing how the muscles may have attached.

A sign in the biomechanics exhibit discussed how juvenile animals may have moved differently from adults. I read it as school children ran, skipped, and bounced by me. You think? 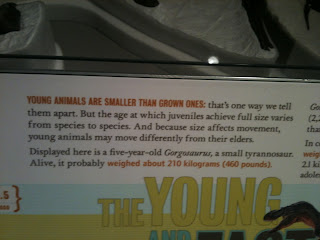 There was also a beautiful diorama showing how what is now Liaoning Province looked 130 million years ago. Next to the diorama was a display of the actual fossils discovered there. As I looked at one I realized I had been seeing pictures of it for years. Now I have seen the actual fossil. 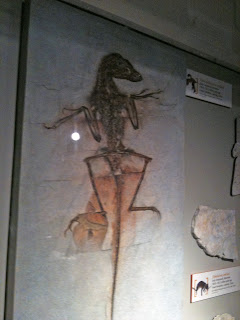 I’ve also seen the fossil of Bambiraptor, discovered by a 14 year old on his family’s ranch in Montana, and so many more. 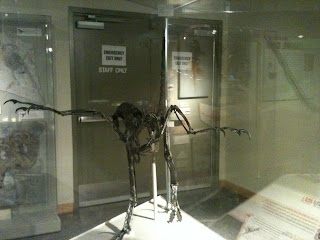 An amusing part of the exhibit was a display of the packing crates used to ship the exhibit. The museum didn’t have storage space for them, so they made it part of the display. I thought that was clever, and actually quite interesting. 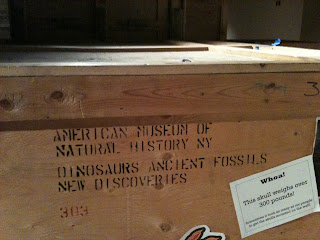 I don’t know how much of an impression the exhibit made on the children bouncing their way around me, but I was thunderstruck. Traveling through time to the days of the dinosaurs, I tipped a mental hat to the many scientists who bring these days to life for us, as well as the many staff and docents in small town museums throughout the country who try to educate us all, especially the juvenile members of our species, who still travel at a bounce.
Posted by Coleslaw at 12:46 PM