At the St. Patrick's Day Parade

When you live in the coastal south, winter is parade season. We have Christmas parades, Mardi Gras parades, and the St. Patrick’s Day parade, but if we have a Fourth of July parade, I couldn’t tell you. I’ve never been to one.

One feature of parades around here is that they attract small religious groups handing out tracts. I don’t know whether it’s the draw of large groups of people anchored in one spot, or whether it’s the presence of Demon Rum, not to mention people having fun in general, but you throw a parade and there they are.

Saturday, I collected four. The first two were fairly simple ones of the sort you could print up on your home computer, being given out by Trinity Baptist Church. They apparently had a assortment, since my husband got “How Many Sins Does it Take to Send a Person to Hell?” whereas I got “Will You Go To Heaven When You Die?”* The answers, in case you are wondering, are “one” and “no” respectively.

The other two are slicker products, printed up by religious publishing houses and acquired by local groups for distribution. “The Only Doorway” has a picture of gates on the front (they aren’t pearly). It’s printed by the Fellowship Tract League of Lebanon, Ohio, but has a stamped address on it of a ministry in Richmond, Texas. I find that puzzling. Don’t they have St. Patrick’s Day parades in Texas? Why come all the way here to Louisiana? We get a lot of Texas traffic coming this way to the casinos, but surely the casino goers wouldn’t be handing out religious tracts.

The last one is the slickest of all (literally, as it’s printed on slick paper). On the front, it has a picture of Mardi Gras beads with the words “may I ask you a question?” It’s from EvanTell in Dallas, Texas, but it has the address of a local ministry (well, 50 miles away) printed, not stamped, on the back.

The question it asks is, “Has anyone ever taken a Bible and shown you how you can know for sure that you are going to heaven?” 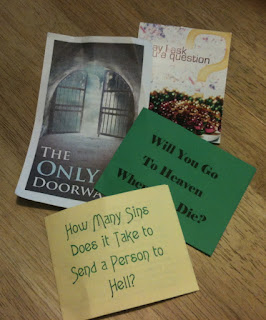 I have to admit, I was being disingenuous when I said, “I don’t know whether it’s the draw of large groups of people anchored in one spot, or whether it’s the presence of Demon Rum, not to mention people having fun in general, but you throw a parade and there they are.” The tracts are part of a larger turf war. Mardi Gras and St. Patrick’s Day celebrations are Catholic in origin, and the tracts promote theology that is, so far as I can tell, Baptist. They aren’t printed for the purpose of converting the heathen, otherwise instead of using the Bible as a starting point, they would start by offering evidence that the Bible is a trustworthy document. The aim of these tracts is to convert the wrong kind of Christians (whether Catholic or not) to being the right kind of Christian. Then another kind of Christian can label you the wrong kind of Christian and start all over again.

*Throughout the post, I’m following the capitalization used on the respective tracts. Yes, I know it’s not how they taught us to do it in grade school. I never get it right, either.
Posted by Coleslaw at 8:53 AM