Wheeling Around the British Isles

My son Neal has a job that keeps him on the run. Two years ago he spent four months in London, last year he spent almost the whole year in Paris, and this year he is back in London, working on a job in Amsterdam. Now that we are retired and at liberty to travel, my husband and I decided to visit Neal, and to make a tour of the surrounding areas. The only other time we have ever gone on a package tour was when we went to Antarctica, but a bus tour seemed like a good way to go, so we called a travel agent and booked a tour plus an airline flight that got us to England a week early, so we could have a long visit with Neal.


Then I discovered I had broken my foot, some time before Easter. I had attributed the pain to something else, and put off seeing a doctor until a week before the trip. (Why I am allowed out without a keeper, I do not know.) He gave advice about renting a wheelchair and other logistics, and sent us on our way with his blessings. Dr. S is very fond of London. My hunch is that if I were planing to visit Bangkok, his advice would have been to stay home.


Our week in London with Neal allowed us to see not only him, for the first time since Christmas, but also our first foreign exchange student, who is from Thailand but currently studying in London. We also got to do a lot of the usual touristy sight-seeing: the Tower of London, Westminster Abbey, St. Paul's Cathedral, the British Museum, the National Gallery,  Harrod's. I wanted to spend money in Harrod's, but the only thing I saw that I liked was a Persian rug that would have looked perfect in our back room and cost £12,000, which I didn't have on me at the time.


We also got to taste English food. Up to now, I had always thought that people were joking when they talked about how bad English food is. I knew about the law banning more than five ice cubes from being produced in the whole country at any one time, but not about the one banning salt shakers from areas where food is prepared. They have them on tables; you would think some enterprising soul would smuggle one into the kitchen. Now I know why Indian food is so popular in England. We enjoyed two meals at Tayyab's, on Fieldgate Street, a place so popular that people were queuing up for table space by 5 in the afternoon.


After a week of hanging out with Neal, we joined up with our bus tour at a hotel across town.  The tour, called Britain and Ireland Highlights, was an 8 day trip up into Scotland, across to Ireland by ferry, then  to Wales by ferry, and back to London via Bath, Salisbury and Stonehenge. Emphasis was more on breadth than depth, and a lot of our sightseeing consisted of looking out the bus window, but we hit the tourist hotspots: Anne Hathaway's cottage and William Shakespeare's birthplace in Stratford upon Avon, York Minster, a cruise on Windermere in the Lake Country followed by a trip to Wordsworth's burial place, Edinburgh Castle, the Irish National Stud Farm, the Waterford Crystal factory, the Roman Museum in Bath, Salisbury Cathedral, and of course, Stonehenge for the big finish.


Our bus mates were quite friendly and of course, interested in my condition, which I tried to keep from being the focus of attention. All of us were from either the US, Canada, Australia, New Zealand (one person) or Singapore (one young couple) - places with connections to the UK. We did keep running across non-English speaking tour groups in our travels, so it wasn't lack of interest that kept citizens from other countries from exploring the British Isles. There were a few young people on board, such as the couple from Singapore and a few young women traveling together, but most of the group was like my husband and I, retired or about to be and with time and money to travel.


Our trip did not get off to an auspicious start. Our first stop was Anne Hathaway's cottage, where a photographer was waiting to do a group portrait. We were told we would park the bus and walk around to the front of the cottage, a distance that did not look daunting from the bus, so I decided to walk. I realized my mistake a few steps down the hill. By then it was too late to get my wheelchair, because the picture had been taken. I spent most of the rest of the day composing the stern but polite letter I was going to write the tour company on my return about the total ineptness of their personnel in dealing with passengers with disabilities, but within a day or two our guide and bus driver figured out was I was going to need in the way of help, as shown by my experience at Edinburgh Castle. We now have a lovely picture of our fellow passengers; we're just not in it.

I also did not get to see York Minster up close, because the streets of York are cobblestoned, especially the Shambles, which we would to have had to backtrack to get to the Minster, and that would have left my wheelchair in shambles. We did get to see the smaller but quite delightful St. Martin's Church, and the Newgate Market. 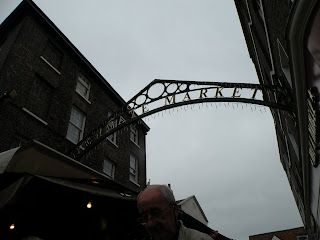 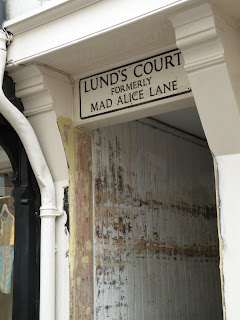 From York we went to Harrowgate to spend the night, and from Harrowgate to the Lake Country, where we opted to take the extra excursion that involved taking an old steam train to Windermere and a ferry across Windermere to catch up with the bus and go to Grasmere. We ended the day in Glasgow. Despite spending two nights in Glasgow, we didn't see much of it, because the next day we took a day trip to Edinburgh and stopped at a farm/inn on our way back to have dinner and entertainment. Diner was overcooked lamb, but the singing was good.

I think there is going to need to be a part 2 to this story, and possibly 3. At any rate, we left Glasgow early to catch the ferry to Ireland, and that's where we'll pick up in my next post.