A Day with the Bard, and without Aldgate

Once we returned from the coast, John and I were on our own for two days before flying back home. On Monday, we finally made it to Shakespeare’s Globe, a reconstruction of Shakespeare’s Globe Theater, across the Thames and close to its original site. Then we spent some time wandering around the neighborhood before going back to the hotel to rest up before meeting Neal’s friend M at a tapas restaurant.

The reconstruction was the brain child of Sam Wanamaker, an American actor and director who later said if he realized how long it was going to take to accomplish, he probably never would have started. There were no performances going on while we were there but we did get to take a tour and of course, take pictures.


Several times when we were sightseeing along the south bank of the Thames, we found it easier to get back to the hotel by walking across the nearest bridge and wending our way to Leadenhall and then to Aldgate High Street, which intersects Commercial at the corner where our hotel sat, than taking the tube. 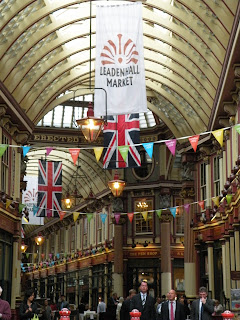 Aldgate was the eastern-most gateway through London Wall leading from the City of London to Whitechapel and the East End of London.

I have to admit, though, “St. Botolph Without Aldgate” does sound like a laundry detergent updated to remove some pesky, environmentally hazardous chemical. “Whites not white enough? Try St. Botolph, now without Aldgate.” We never went in the church, but I did take a few pictures outside. 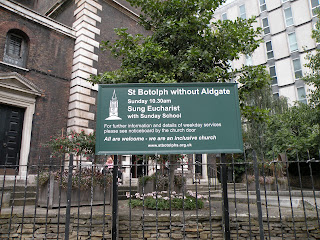 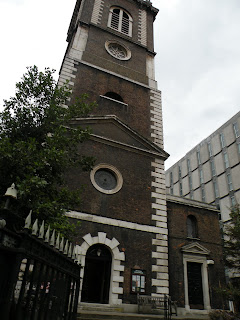