It's Not a Bad Little Coffee Mug, Really

I know I am supposed to be writing accounts of my travels, but I have been busy since I got home. Earlier this week, for instance, I attended a conference of the Retired State Employees Association, as a guest of my husband, who is a retired state employee. The conference was held here in town, but they did keep us busy, not to mention well fed. Besides, there were door prizes.

Monday afternoon we started off by attending a workshop on genealogy. I was not aware of this, but our parish public library system has a genealogy department, with  free access to their ancestors.com subscription, classes, and even librarians to assist you in your research. Alas, this would not be of too much help to me, because my grandparents immigrated here from Italy, and the ancestors.com data bases do not reach that far. Not only that, but when my dad did try to trace some of the relatives when he was in Italy during WWII, he discovered that several of them had migrated to Argentina. Still, it might be fun to track down just when my various grandparents arrived, and maybe to see if I could learn more about my Grandma D’s mysterious first husband.

After a buffet style jambalaya dinner, we played bingo. It is impossible to have a gathering in southeast Louisiana without jambalaya and bingo. They’re the unmentioned eight and ninth sacraments. The bingo games were funny. Each game had five winners. The first person to reach bingo in each game got a ten dollar  Walmart gift certificate. Then we kept playing without clearing the boards until there were four more winners (more in case of ties), who each got RSEA coffee mugs. Once five people had won, we started a new game. I won a mug. It’s not a bad little coffee mug, really. 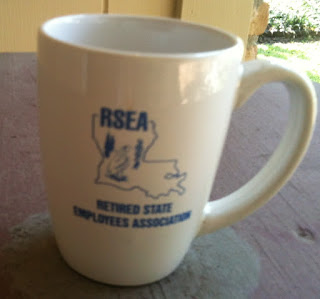 Tuesday, we had our keynote speaker, former Louisiana governor and recent Federal parolee Edwin Edwards. You have no idea how much I enjoy writing lines like that. He might seem like an odd choice as keynote speaker, but it was under Governor Edwards that the Louisiana state constitution was rewritten in the 1970’s and included strong protections for the job rights of state employees, much to the chagrin of our latest governor. Whatever you think of Edwards as a person, he is a charming and humorous speaker. He began by talking about his first federal job, carrying water to workers on a government project for nine cents an hour. Many years later, he got his second Federal job as a prison librarian, for 22 cents an hour, so that was a bit of a pay raise there.

John and I did well during the door prizes. He won a gift certificate for a local restaurant and I won an autumn wreath. 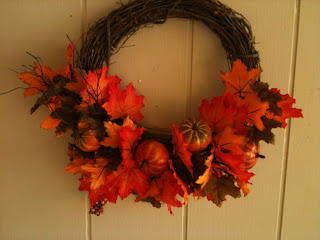 I’m glad the conference didn’t last longer than it did. All our meals were included, in addition to the jambalaya dinner: a continental breakfast, a full plate lunch with salad and dessert, full dinner at a dinner dance, and a plate breakfast the next morning. I’m surprised I didn’t have to roll out the door.

But now that that’s over with, I’m back to my usual schedule of sloth and ease, and will, I promise, write up my adventures in England.