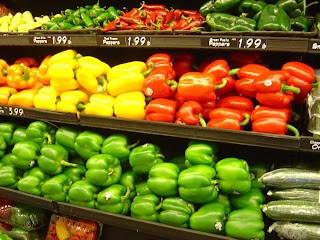 I've become a big fan of the Food Channel.  My favorite is the Barefoot Contessa, followed by Giada at Home and Semi-Homemade. Occasionally I watch Rachel Ray and her 30 Minute Meals, which generally involve being able to compress ten minutes of pasta cooking into a two minute commercial break. I'm a girl at heart; I still love fairy tales.

The other night I planned what should have been a quick fix meal, even bearing in mind that I do not have an army of assistants outside of camera range to do the shopping, organizing and some of the prep work.  The menu was simple:  Salmon with Lemon and Parmesan Crust (I cannot rave enough about this dish), leftover stir fried noodles and vegetables, and a salad of hearts of artichokes, hearts of palm and romaine hearts (a Rachel Ray dish) dressed with a lemon vinaigrette adapted from Ina Gartner's roasted artichoke salad.  So, mix up the salmon crust, mix up the dressing, reheat the vegetables and throw the salad together while the salmon bakes.  How hard could that be, as Ina would say?

One of the ingredients for the salmon is green onions.  I knew we had a bag of green onions in the crisper.  What I did not know is that they were starting to go bad, and that it would take almost ten minutes to peel and cut the not so nice parts from the still good parts to get enough to use.  Then there was the matter of the artichoke hearts for the salad.  Instead of hearts, I accidentally grabbed a can of artichoke bottoms.  I found a container for them and found the artichoke hearts, but that took more time.  Why is it that when Ina, Rachel, and Sandy are looking for canned goods, they are always right at the front of the pantry shelf, not buried behind an aging can of coconut milk?

Then there was the vinaigrette.  It sounds so easy - throw a bunch of ingredients in a blender. How bad could that be?  Ina would have whipped hers up during the opening credits in between mixing scone batter.  It always takes me ten to fifteen minutes, mostly because I have to chase down the right size measuring spoons, and mince shallots.

It really only took about 45 minutes to whip up dinner.  Still not bad for a quick meal.  I even have a plan for the artichoke bottoms - Eggs Sardou.  Poach some eggs, cream some spinach, make a side dish of cheese grits.  How long could that take?