May Is Better Speech and Hearing Month 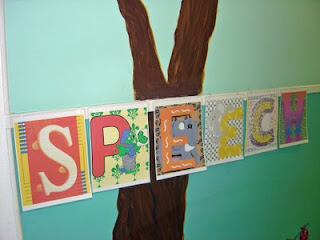 Or as ASHA puts it, Better Hearing and Speech Month, but this is my blog and I'll write it in the order I want.
The story of how I became a speech/language pathologist is a study in serendipity.  Back when I was 14 years old, I had a crush on a boy in my English class, although looking back on it I can't imagine why.  Anyway, my English teacher wanted us each to give a short speech on what we wanted to be when we grew up.  I borrowed the neighbors' encyclopedia, which had a section on Careers, and looked for something that would be suitably exotic to impress Crush Boy.  Somehow I settled on audiologist, and although nothing ever came of the crush, the career idea stuck.
When I got to college I discovered that even people who hear can have speech and language problems, and decided I was far more interested in speech pathology than audiology.  So here I am, 40 some odd years after our career day, teaching children how to roll their "r's" and put words together into sentences.  Whereas if I hadn't been trying to impress a classmate, I might have ended up in secretarial school.
And then years later, when computers and word processing came along, I would have had to learn software, which might have led to my taking computer science classes, and I could have ended up making some real money.  But it doesn't do to be bitter.
Happy Better Speech and Hearing Month, everybody.
Posted by Coleslaw at 8:52 PM