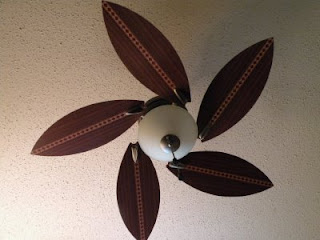 Yesterday I was given a homework assignment by a sort of mentor of mine to take 100 pictures of things that are not on a level between my eyes and my knees.  Above is the first picture of this series - a picture of the ceiling fan in the third bedroom taken while I was lying on the floor under it.  I also learned my first lesson - if you are going to photograph a ceiling fan, turn it off first.  Unfortunately, this bright idea did not occur to me until after I was on the floor.

The ceiling fan is part of a funny story.  My husband is a lovable, sweet person in many ways, but like anybody, he has a few flaws.  He is a talented man who can fix almost anything.  He can do electrical work, plumbing, rough carpentry, and painting as well as cooking, sewing, and cleaning.  So whenever we need anything done around the house, he will usually do it himself rather than hire someone to do it.

The problem is, a jack of all trades is, as we all know, a master of none, so while he almost always does a good job, he runs into snags along the way, and every time he runs into a snag, I hear the same thing.  "This was all your idea.  I never wanted to do this, but you just had to have your way."  Before the ceiling fan, the previous most inappropriate time he recited this litany was when he fell off a ladder onto the toilet while painting the bathroom and broke a chip out of the rim of the toilet tank.  From that moment on, the chipped tank has always been, in his mind, all my fault.  In my mind, it has always been a sign that my husband, while adorable, is pretty much as cracked as the tank, but I usually keep that opinion to myself.

Fast forward five years.  I have problems with the light in the third bedroom, which is where I keep my computer.  I suggest to husband that we hire an electrician to fix the wiring.  Husband says, no, the real problem is the ceiling fan (the light fixture being attached to the fan), and that he has always wanted a new one anyway.  We go to Lowe's, and he picks out the fan he wants, which is one I wouldn't have picked but can live with.

Okay, gentle reader, you know where this is going, don't you?  Sure enough, half an hour into the project I hear grumbling coming from the third bedroom.  Either the fan will run but the light won't work, or if he gets the light to work, the fan won't run.  I walk into the room just in time to hear, "This was all your idea.  I never wanted to do this, but you just had to have a new ceiling fan."

I spoke in an amazingly quiet voice for someone on the verge of (justifiable) homicide.  I explained in the careful tones one uses with someone wearing a tinfoil hat that, no, in fact, I had not asked for a ceiling fan, I had asked that we call an electrician to deal with what was obviously faulty wiring, and that the fan was not only his idea, but his exact choice.  He had to admit that it was so.  Shamefaced, he returned to his task, and eventually got the fan working.

Poor baby.  Now every time he starts into his "This was all your idea" routine, all I have to do is say, "like the ceiling fan".  He really doesn't know what hit him, but the way I figure it, he's just fortunate it wasn't a hammer, wielded by me.

I love that little fan.
Posted by Coleslaw at 4:49 PM