I Have a Homework Assignment 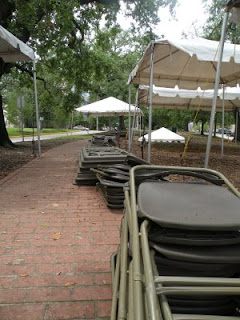 Hubby and I went to a music festival today but left early because it was about to storm.  We did hear two bands and got to see the arts and crafts booths.  One of the booths belonged to a photographer from New Orleans named Joshua Lee.  He had a booth in the same spot last year and we had begun talking about photography.  He gave me a lot of encouragement despite the fact I didn't buy anything.
This year I looked to see him again and this time I bought a DVD called Katrina Revealed:Rebuilding Lives in the Big Uneasy.  We talked a little about my recent trip and how I took over 1200 pictures, and he gave me a homework assignment: take 100 pictures, but none of them can be between my knees and my eyes.  I need to be either down low or up on something when I take the pictures.  When I'm done, Josh wants me to email him and tell him what I learned.
When I left the booth I marveled that there are people like this in the world.  He's seen me twice in his life, he's never even looked at a photograph I've taken, and yet he was willing to offer help and encouragement not just to me, but to other people who stopped by his booth. Whenever I think about all the bad in the world I also try to remember all the Joshua Lees - the people who help other people just because that's what they do.  It's more than just their actions, it's the way they see the world.
And now I have to learn to see the world from a different perspective, as in the picture above, which I took while down on one creaky, arthritic knee.  Wish me luck, and learning.
Posted by Coleslaw at 8:22 PM