Why Do People Do This? 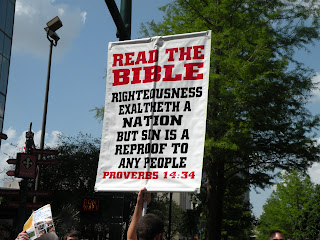 Last weekend we attended the 23rd annual Festival International de Louisiane in Lafayette, Louisiana. The festival is a music festival with bands from around the world, primarily the French speaking world, and also has open air markets selling crafts both local and international, and of course, food and beverage booths. We love it because it's free and fun.

I took this picture at the festival. There doesn't seem to be any venue where people gather for innocent fun where I don't see a sign like this. I'm not sure what God was supposed to have been offended by. Music? Dancing? Cajun food? Coke products? Maybe the Budweiser products?

Our city's fireworks display seems to be a popular target for these kind of signs, too. That one really puzzles me. God hates fireworks? John Phillips Sousa marches?

Don't tell me that the people carrying these signs are just taking advantage of large gatherings to spread the Good News of Jesus Christ. I've seen these people in action. They aren't carrying signs that say John 3:16 or "Come unto me all ye who are weary or heavy laden and I will give you rest". There are plenty of other religious groups to be seen at these festivals. They sing as gospel choirs. They host food or craft booths to raise some money for their churches or other causes. They act like people you might actually want to spend an hour or so with, let alone all eternity.

But the sign bearers? They remind me of an observation by Bonaro Overstreet in her article The Unloving Personality and the Religion of Love, in which she describes persons who


conceal their unlovingness from themselves and rarely suspect that what motivates their daily actions is by no means an outgoing love but rather a consuming desire to take in from their world - to take in love, comfort, approval, protection, reassurance, adulation.

She goes on to say that such persons must subtly convert the religion of love into a religion of hate.

I think the only thing she was wrong about is the subtle part.